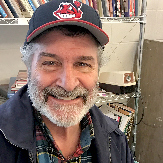 Born in Zanesville, Ohio, TED JORDAN graduated from the Peddie School in Hightstown, New Jersey in 1964. He went on to attend Miami university of Ohio, graduating in 1968. Ted pursued graduate work in art at The University of Iowa, obtaining an M.A. and a M.F.A. in the early 70s.

After his graduate work, Ted moved to New York City, where he purchased a loft in SOHO, working as a painter and conceptual artist.

He moved to Hilton Head Island after retiring from Hallmark Cards in Kansas City, where he created the Mahogany card line – The very successful card line for the African-American consumer.

Ted became a member of Art League of Hilton Head, teaching painting & drawing and design at Art League Academy. Ted has shown his work for the past 10 years.