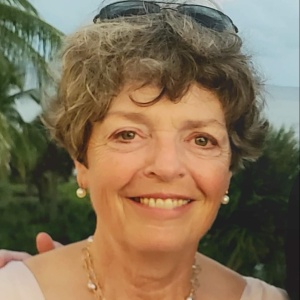 A native of Connecticut, I have an art and music background.  Musically, I studied violin, viola and voice privately, and performed professionally into my 20’s.

I was first introduced to the world of fine art as a little girl; influenced and encouraged by my “Uncle Teddy” — Ted Davies, a renowned woodcut artist — who sat me on a stool in his studio and put a piece of charcoal in my hand.  In high school, Richard Montross became my mentor and kept me going when the 60’s era had other ideas.  I went on to attend the Vancouver School of Art, then the University of Alaska, and later, the American Academy of Dramatic Arts in New York.  Professionally, I ran Amber Rose Advertising in Alaska and Design for Business in Connecticut, before joining The Wright Companies as their Marketing and Creative Director, winning more awards for their advertising than any other real estate firm in Connecticut.  In addition to commercial graphic design, I continued to paint, mostly watercolor portraits, on a limited basis.

In the early ’90s, while raising my two boys, I became a licensed Realtor and continued to work with the Wright Companies in a sales capacity.  A recipient of several awards, I was inducted into the “RE/MAX Hall of Fame” in 2005 for record accumulated sales.

The tug and longing for a return to the arts were prompted first by my visit a few years ago to the now fully accredited Emily Carr University of Art and Design — once the Vancouver School of Art.  Additionally, weeks spent in Maui with my husband Tom sparked and reignited the “artist in my bones,” beginning with sketches and ink drawings, which Nicholas (my artist blacksmith son and owner of WicksForge) now carves into linoleum for prints.

Since moving to South Carolina, I have been fascinated with the “Low Country” and its beauty, and have returned to painting full time, mostly in oil and acrylics.  There is abundant joy in creating and sharing, and by doing so, I hope to make a small difference in the lives of others along the way.